How many of you have dreamed of making a positive change in the world, only to be told that you’re too young to do it? Well, we’ve got news for you – you are NEVER too young to make a difference.

Around the world, teenagers have been stepping up as leaders and activists to solve some of the world’s biggest problems. Take Greta Thunberg, for example, the Swedish teenager who has done so much to raise awareness about climate change around the world. And what about Malala Yousafzai, who became a global icon thanks to her work in promoting education for girls?

Back home in Malaysia, we’ve got plenty of young leaders who are doing the same. Here are their stories, as well as their advice for all the teenagers out there who want to help change the world

Heidy Quah, Founder of Refuge for the Refugees Heidy Quah began her journey as a youth activist in 2012 when she was just 18 years old. After learning that refugee children in Malaysia are not allowed to attend formal schools, she decided to do something about it.

That’s when she founded Refuge For The Refugees (RFTR), a non-profit organisation that provides education to refugee children and raises awareness about the challenges they face.

It started small, but today, RFTR has over 30 schools in Malaysia and Myanmar!

Her work has been so impactful that she was awarded the Queen’s Young Leaders Award from Her Majesty Queen Elizabeth II — and yes, she got to meet the Queen herself in England!

But her activism work goes beyond providing education. During the Covid-19 pandemic, Quah worked with several partner organisations to raise funds and donate essentials to vulnerable communities.

“When we thought of helping these families, our first thought was whether we would be doing it alone or if we should do it with partners?” said Quah.

“We then decided to partner up with Liga Rakyat Demokratik, Tenaganita, and Dapur Jalanan. Having four organisations come together as partners was a massive game-changer for us.”

In the end, the project helped feed over 1,200 struggling families during the Covid-19 lockdown!

But none of these achievements have come easy. Heidy said she has gone through many tough times as a young activist.

“One of the main struggles would be feeling lonely in the journey because there is so much to do, with an overwhelming amount of need. I think it’s because of the lack of resources, and feeling that we are really limited to our capacity,” said Quah.

To overcome these struggles, Quah says it’s important to collaborate with others, as there’s nothing we can’t overcome if we learn to work together.

“It’s not just about the organisations getting involved. It’s also about the volunteers who have been working hard within our existing networks and the people on the receiving end,” added Quah.

“Our collaborations have allowed us to make a positive impact in these communities, much bigger than what we had anticipated,” she expressed.

Quah and her team at Refuge for the Refugees (RFTR) continue to work on their objectives to stand up for refugee rights. 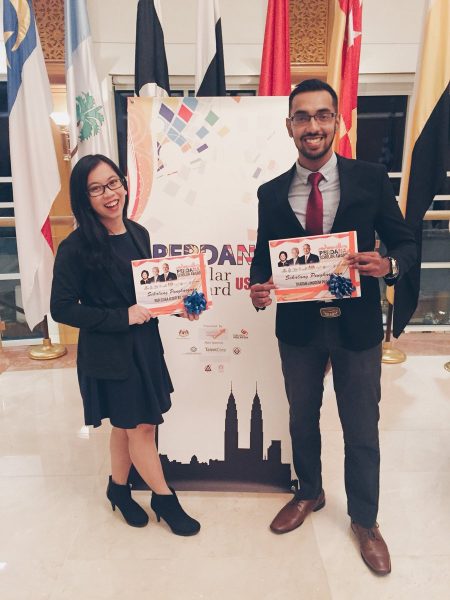 In 2019, Qyira Yusri and Tharma Pillai made history when their UNDI 18 campaign finally succeeded in getting the Malaysian Parliament to lower the voting age from 21 to 18.

It was a historic change, one which will allow Malaysian youth to have a bigger say in how the country is being run.

“I never intended to become an activist,” said Tharma. “I was a final year student in America, and I saw that Americans could vote at 18 years old, yet Malaysians couldn’t. The issue of being represented in a democracy was deeply important to me, so I decided to champion this issue.”

Qyira’s work also started when she was in university. She was actively involved in the student government, working with Malaysian students abroad who were facing problems.

She had grown up watching her mother teach children from low-income families, and that made her start thinking about ways to help the less fortunate.

“It was the awareness of my privilege and my position in society that made me realize it was my obligation to work in advocacy,” she said.

While the UNDI 18 campaign is now seen as a historic success, things started out pretty rough.

Qyira and Tharma had to start from scratch because they had no connections to political leaders. They also had to battle criticism from people who felt 18-year-olds are not ready to vote.

“As a young person with limited experience, there was definitely a huge learning curve to understand advocacy, to learn about ways to manage an organisation and utilise your volunteers, and also to find ways to engage your stakeholders,” Tharma shared.

“Each struggle that we faced was an important and invaluable lesson.”

Time management was another issue.

“We had to juggle between studying, exams, graduation, and then our careers as we ran the campaign part-time and over the weekends,” added Qyira.

Tharma’s advice on making it work is to have reasonable, focused, and achievable goals.

“Many people have big ambitions – like I want to revolutionise the education system! I want to transform Malaysia!”

“However they do not have a definite, logical action plan to achieve it. Ambition without plan and action is no different from day-dreaming,” said Tharma.

The team organised forums with student leaders to combat the criticisms they faced. They also lobbied 16 student groups for their initial petition and recruited teenagers as their volunteers.

Their main tool for pushing the movement was social media, in order to reach more young people. Soon enough, it caught the attention of Muar MP YB Syed Saddiq Syed Abdul Rahman, who helped lobby for the UNDI 18 bill in Parliament.

Aside from lowering the voting age to 18, the bill also includes automatic voter registration for 18-year-old Malaysians, and lowering the minimum age for elected representatives to 18 as well.

On July 16, 2019, after three years of advocacy, the Dewan Rakyat voted unanimously in favour of the UNDI 18 bill. UNDI 18 is expected to be fully implemented by the end of 2021. Nadiah and her young team at Klima Action Malaysia (KAMY), a group aged 20-31, have been raising awareness about the climate crisis throughout Malaysia and pushing for the Malaysian government to treat it as an emergency.

The first Global Climate Strike led by fellow youth activist Greta Thunberg was one of the inspirations behind KAMY. After hearing about Thunberg’s global movement, Nadiah was determined to take advantage of it to make a change in Malaysia as well.

She met up with like-minded friends, students, and working professionals, some of whom had no knowledge of environmental issues but were all willing to work hard to make a positive change.

They saw an opportunity to finally address the climate crisis in Malaysia.

Nadiah’s journey in activism had started long before KAMY. She had previously worked with the Temiar people of Kelantan who were involved in a land dispute with logging companies that were destroying the Temiar’s ancestral land.

She witnessed first-hand the struggles of the orang asli community as she was part of the team that provided aid and food supplies to the affected families.

“Through this experience, I understood how much the orang asli community were impacted by environmental degradation. The worst part is that it was not even caused by them, but they had to bear the consequences,” she added.

While working on these issues, Nadiah realised that there was a clash of understanding the science behind environmental issues  and policymaking.

“Some policymakers are environmentally illiterate, and there is also a lack of youth and community participation in stakeholders meetings. These are all issues that need to be highlighted and resolved.

“This is why my team incorporated environmental information dissemination into KAMY’s objectives because the public and politicians alike must be aware of what is happening to our environment,” she explained.

Aside from its work with communities, KAMY also does a lot of work internally by organising capacity-building workshops for their young members.

“I hope that young people will start to realise that there is more to life than just school, university, work and career. These are important things, but there are important issues that need to be addressed in our society such as the climate crisis.”

“In order to make a change, we need to learn and unlearn many perspectives. There are many unconventional ways to do things and you can still succeed at it,” she added.

KAMY has also organised several protests, including the fourth Climate Strike in 2019, on the streets of Kuala Lumpur, where NGOs, politicians, and activists gave speeches about climate change and justice.

KAMY continues to conduct climate workshops in schools, universities and communities to spread awareness and to empower others to run their own climate campaigns. 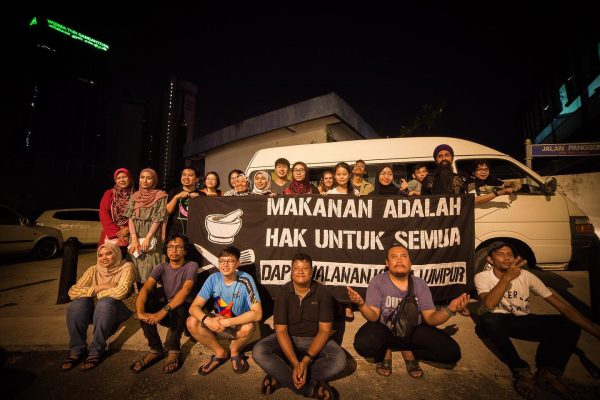 “When I was a teenager I was very influenced by punk music, from bands such as CRASS and Conflict because their lyrics talk a lot about war, oppression and corruption,” said Pak Wan.

“After SPM, I went to several gigs in Penang and that’s where I met friends who started the Food Not Bombs (FNBPP) movement.”

They started as a protest against the waste of funds in the military industry, as they felt these funds could have been used to feed hungry people in the city.

“I joined the protest and started giving free food to the hungry and homeless,” he said.

“This is where I began to learn about life, why people choose certain paths in life, and about human rights.

“Many questions came about in this process of self-development. I wanted to try and solve these questions, and my motto was ‘Youth Power!’”

Today, he is the president of Dapur Jalanan Kuala Lumpur, an organisation that has been preparing and distributing food to urban poor and homeless every week for the past seven years.

According to the seasoned activist, constant engagement with the community is important when championing a cause.

“Look at issues that exist in the local area. Engaging with the community will give you a holistic understanding of the issues they face.

“It’s important to do your research about similar issues faced by different communities in other areas. Then, analyse the efficacy of their solutions and evaluate whether they can be implemented in your local area too,” he added.

He also advised young activists to get partners and collaborators onboard to share the workload.

“It is important to find a mutual interest partner to ease the workload and set objectives clearly. Then, start with an easy process to get community feedback and make sure it is consistent. It is important to understand the timeline of the campaign – don’t rush to reach the goal,” he said.

4. Build your network
Start building a network of people who support your work, and can easily be called into action. And don’t underestimate the importance of “networking”, which is basically meeting new people and learning how you can help each other out.

5. Use the power of the Internet
Digital media is a great way to amplify your campaign message, keep your network of supporters updated, and even raise funds. And you don’t have to create any high-tech platforms – just use free tools or networks like Facebook, WhatsApp, Instagram, Telegram, etc.